← Interview: Yermi Brenner on his early work in China and the steps to becoming an independent multimedia journalist
Interview: Erik Olsen on the freedom of being an online VJ and his most memorable experience to date →

A week in the life of online newspaper video

There’s no doubt that newspapers are producing an ever-increasing amount of online videos for their readers. So I decided to take a look at what they make their videos about.

In order to make this a more manageable and effective task, I have only been looking at the videos filed under ‘World’ or ‘International’ news. That said, this has involved me watching close to a hundred online video reports.

I chose The Guardian, The Financial Times, The New York Times and The Sydney Morning Herald. These four are particularly prolific when it comes to online video output and I felt that covering newspapers from three continents would provide a sufficient geographical spread.

Rather than analysing each video or common theme in boring detail, I thought it would be more interesting to display each paper’s output using a new tool that I learnt this week – that of word clouding.

To do this, I took the descriptions and tags from every video for each website over the last week. I then put this into a word cloud creater – I used both Wordle and Many Eyes. Let me know what you think.

The news this week was dominated by Libya, but as the results for the Guardian demonstrate, the earthquake and tsunami in Japan came to dominate the agenda by the end of the week. 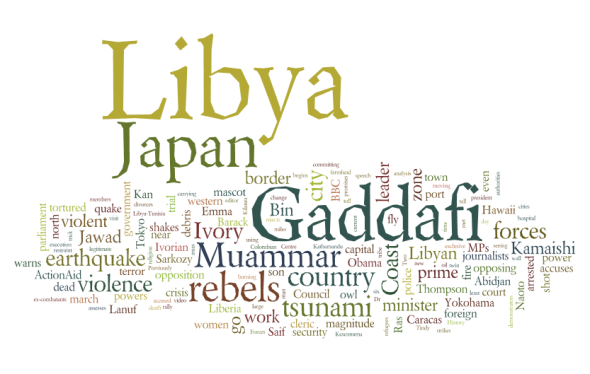 Interestingly, the FT’s focus seemed to be more on arts than anything else. But Libya and Japan were also covered.

The SMH seemed a bit slow on the uptake following the tsunami in Japan, despite sourcing most of its video from APTN.

The NYT covered the widest variety of topics, but Libya and Gaddafi still dominated its world news output for the week.